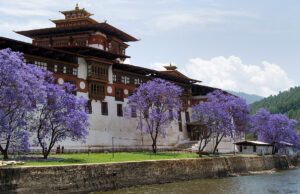 The landscape ranges from sub-tropical plains in the south to the Himalayan mountain ranges in the north, with some peaks exceeding 7000 meters above sea level. Mahayana Buddhism is the state religion and the population is predominantly Buddhist. Thimphu is the capital of Bhutan and is also the largest city in the country.

Bhutanese arts and crafts stand as a pulsating testimony to the country’s rich cultural heritage. Apart from its roots in the intrinsic religious significance, it possesses a boundless creativity in its style.

From the majestic dzongs to people’s homes, the country’s unique arts and crafts embody the common national consciousness. Its simplicity, use of rich natural colors, and the religious thematic undertones create a poignant expression of the human will to achieve perfection.

Bhutan's thirteen traditional arts and crafts (Zorig Chusum) is a legacy from the 17th century masters. They include: 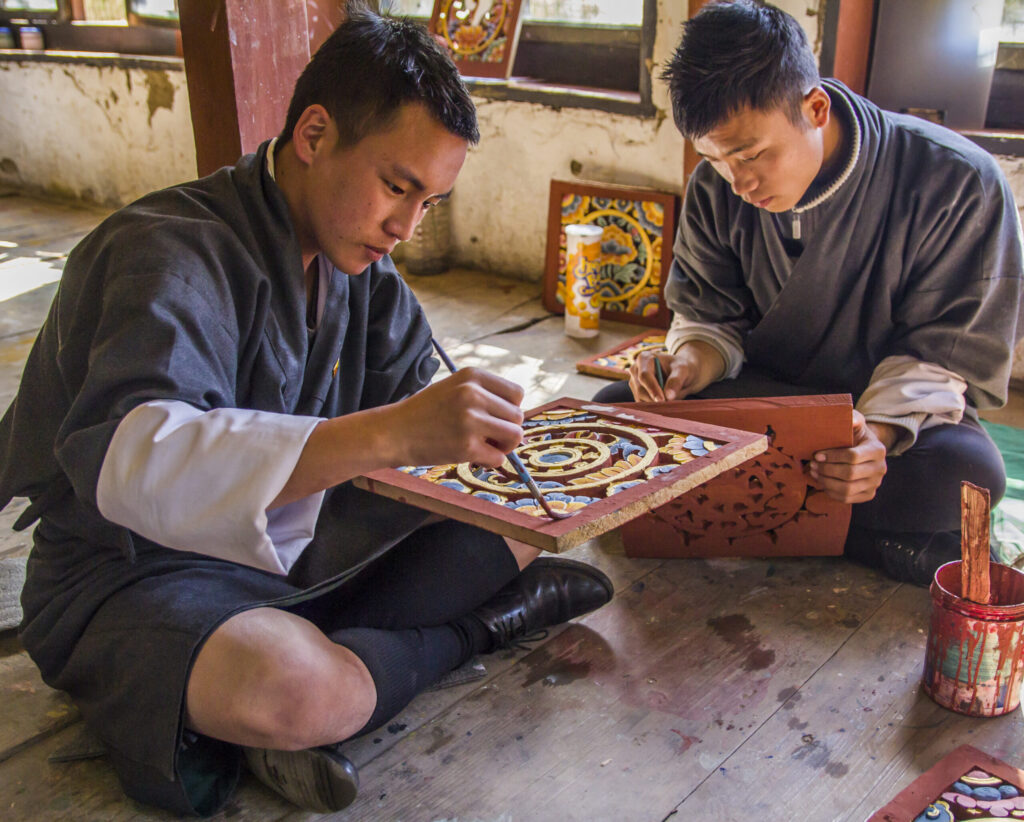 The Zorig Chusum Institutes in Thimphu and Tashi Yangtse, promote the country's arts and crafts. The two institutes play a pivotal role in propagating the country's traditional arts and crafts. Many cottage industries around the country are involved  specific arts or crafts. Despite the imminent threat from the forces of globalization and liberal trade, the government of Bhutan has helped preserve these arts and crafts through various national initiatives.

Bhutanese arts and crafts contribute to the socio-economy of Bhutan and, more importantly, reflect the way of life and culture of Bhutanese people.

Bhutan has a rich and unique cultural heritage that has largely remained intact due to its isolation from the rest of the world until the early 1960s.  Bhutanese tradition is deeply steeped in its Buddhist heritage 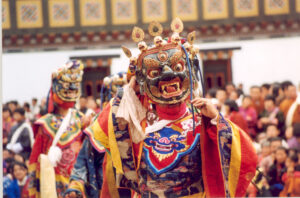 Bhutanese men wear Gho, a knee-length robe tied at the waist by a kera and women wear Kira, an ankle-length dress, with a tego and wonju.  Differently colored scarves are an important indicator of rank and hierachy. Jewellery is mostly worn by women, especially during religious festivals and public gatherings. 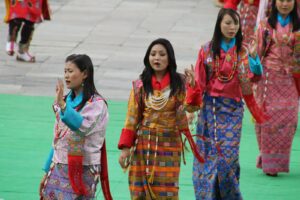 Rice, buckwheat, and increasingly maize, are the staple foods of the country. The Bhutanese diet also includes pork, beef, yak meat, chicken, and mutton. Soups and stews of meat and dried vegetables spiced with chilies and cheese are prepared. The Bhutanese taste palette has a fondness for dishes rich in cheese, chilli and fat. The most popular Bhutanese dish is called Ema datshi and is made with cheese and chilli. Dairy foods, particularly butter and cheese from yaks and cows, are also popular, and indeed almost all milk is turned to butter and cheese. Popular beverages include butter tea, tea, locally brewed rice wine and beer.

Bhutan's national sport is archery and is arguably the most popular sport with competitions held regularly in most villages.  Traditional Bhutanese archery is a social event and competitions are organized between villages, towns, and amateur teams. There are usually plenty of food and drink complete with singing and dancing. Wives and supporters of the participating teams cheer. Competitors attempt to distract an opponent by standing around the target and making fun of the shooter's ability. Khuru is another popular outdoor team sport in which players compete by throwing heavy wooden darts target ten to twenty meters away.

Economists the world over have argued that the key to happiness is obtaining and enjoying material development. Bhutan, however, adheres to a very different belief and advocates that amassing material wealth does not necessarily lead to happiness. Bhutan measures progress, not by the popular idea of Gross Domestic Product (GDP) but, through Gross National Happiness (GNH). 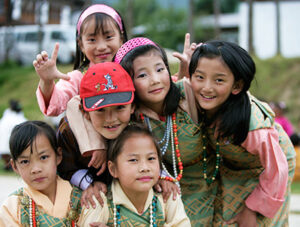 His Majesty the Third Druk Gyalpo Jigme Dorji Wangchuck expressed his view on the goals of development as making “the people prosperous and happy.” With this strong view in mind, the importance of “prosperity and happiness,” was highlighted in the King’s address on the occasion of Bhutan’s admission to the United Nations in 1971. The Fourth Druk Gyalpo emphasized that, for Bhutan, Gross National Happiness is more important than Gross National Product.

Druk Gyalpo Jigme Singye Wangchuck said that the rich are not always happy while the happy generally considered themselves rich. While conventional development models stressed on economic growth as the ultimate objective, the concept of Gross National Happiness is based on the premise that true development of human society takes place when material and spiritual development occur side by side to complement and reinforce each other.

The philosophy of Gross National Happiness has recently received international recognition and the UN has implemented a resolution “…recognizing that the gross domestic product [...] does not adequately reflect the happiness and well-being of people,” and that “…the pursuit of happiness is a fundamental human goal”.

Due to Bhutan’s location and unique geographical and climatic variations, it is one of the world’s last remaining biodiversity hotspots.

Bhutan pristine environment, with high rugged mountains and deep valleys, offers ecosystems that are both rich and diverse. Recognizing the importance of the environment, conservation of its rich biodiversity is one of the government’s development paradigms.

Bhutan is one of the last remaining biodiversity hotspots in the world, forest cover has now increased to over 72% of the country, with 60% of the country under protection. 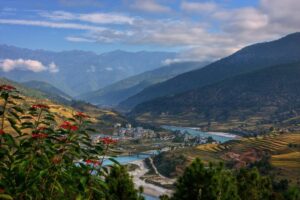 The array of flora and fauna available in Bhutan is unparalleled due to conservation and its wide altitudinal and climatic range. Physically, the country can be divided into three zones:

Bhutan is home to about 300 species of medicinal plants and 46 species of rhododendrons. Some common sights for the visitors are magnolias, junipers, orchids, gentian and Daphne

A wide range of rare and endangered animals can also be found frequenting the dense jungles and high mountains of Bhutan. Due to the countries conservation efforts and its unspoiled natural environment Bhutan supports thriving populations of some of the rarest animals on earth. 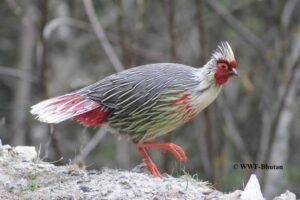 In the tropical forests of Southern Bhutan, one can come across clouded leopards, the one horned rhinoceros, elephants, swamp deers and even the Golden Langur, a species of monkey that is unique to Bhutan.

Bhutan also has a great variety of bird species. It is recognized as an area of high biological diversity and is known as the East Himalayan ‘hot spot’, the hub of 221 global endemic bird areas. The recorded number of bird species is over 670 and is expected to rise as new birds are discovered.

As one of the ten global hotspots, Bhutan is committed to preserve and protect its rich environment through its government and environmental organizations. This commitment is apparent in the fact that the kingdom has the distinct honor of being one of the only nations whose forest cover has actually grown over the years.

Other dialects spoken are Khengkha and Bumthapkha by the Khengpas and Bumthaps people of Central Bhutan. Mangdepkha, which is spoken by the inhabitants of Trongsa and the Cho Cha Nga Chang Kha which is spoken by the Kurtoeps. The Sherpas, Lepchas and the Tamangs in southern Bhutan also have their own dialects. Unfortunately,  Monkha and Gongduepkha are on the verge of extinction. 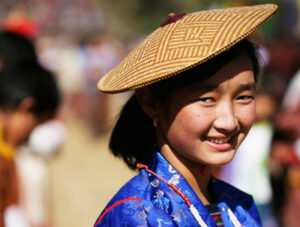 In Bhutanese society, Driglam Namzha plays an important role as a traditional code of etiquette. Driglam Namzha teaches people a code of conduct to adhere to as members of a respectful society. It includes wearing a kabney (traditional scarf) when entering Dzongs, Lhakhangs and offices,  letting the elders and the monks serve themselves first during meals, offering felicitation scarves during ceremonies such as marriages and promotions and politely greeting elders and seniors.

Normally, greetings are limited to saying “Kuzuzangpo” (hello) amongst equals. For seniors and elders, the Bhutanese bow their head a bit and say “kuzuzangpo la” (a more respectful greeting). Recently, shaking hands has become an accepted norm.

The political system of Bhutan has evolved over time together with its tradition and culture. It has developed from a fragmented and a disoriented rule of the different regions by local chieftains, lords and clans into the parliamentary democracy we have in place today.

The first move towards a systematic scheme of governance came in 1616 with the arrival of Zhabdrung Ngawang Namgyal from Tibet. He introduced the dual system of governance with the Je Khenpo as the spiritual head of the nation and the Desi, as the head of the temporal aspects. 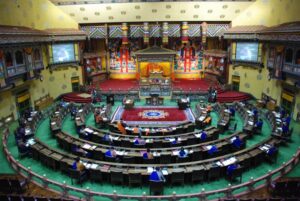 But a major breakthrough came about in 1907 when the people unanimously enthroned Ugyen Wangchuck as the fist hereditary King of Bhutan. He was the man who had proven his mettle by banding together the different Dzongpons and Penlops (governors of fortress), ending centuries of strife and bringing much needed stability and peace to the country. Since then, the country has been ruled by successive monarchs of the Wangchuck dynasty.

In November 2001, on the advice of the Fourth king, a committee chaired by the Chief Justice of Bhutan, was formed to draft the constitution of Bhutan. The constitution was launched in 2008 and with it a parliamentary democracy introduced. The progression from Hereditary Monarchy to that of a Parliamentary Democracy has been a carefully managed process that culminated in 2008 when Bhutan held its first elections country wide.

Construction of a New Multipurpose Hall!

We would like to announce the construction of a new Multipurpose Hall!

Alan and Patricia Bickell have once again offered to provide a matching grant in support for this new multipurpose hall construction proposal.

Please support us in this endeavor to create and improve a conducive learning environment for the underprivileged Bhutanese youth. 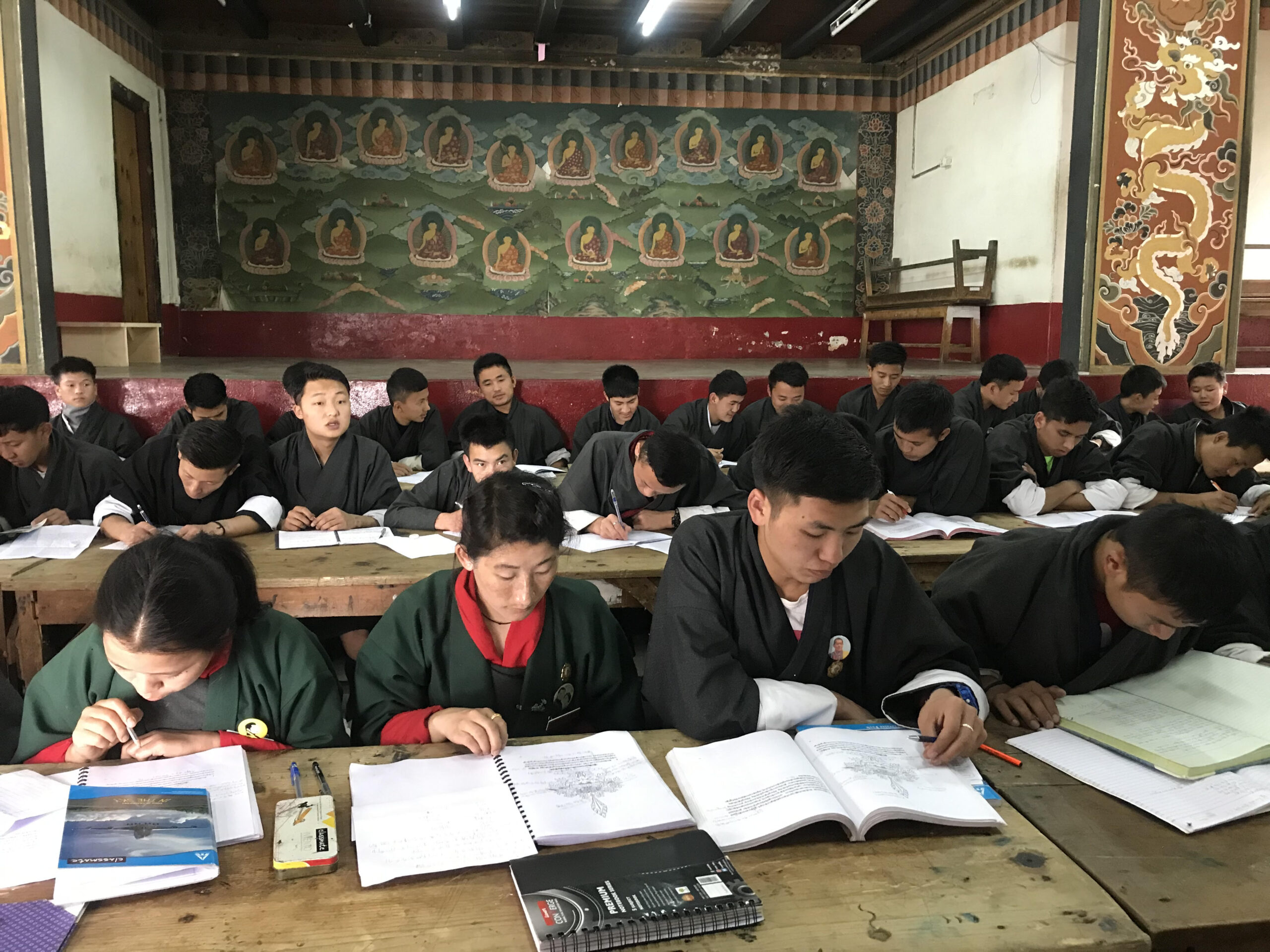